The mobile app computing has revolutionized our communication system by making our lives easier and faster.

As internet connection is getting affordable and faster with the advanced technologies 3G and 4G, more people are showing interest in video chat apps.

Years ago, we were happy with voice and text messaging. But now we can sense the real-life conversation with the help of video chat apps.

However, you can find tons of Alternative video calling/video chat apps in various play stores. 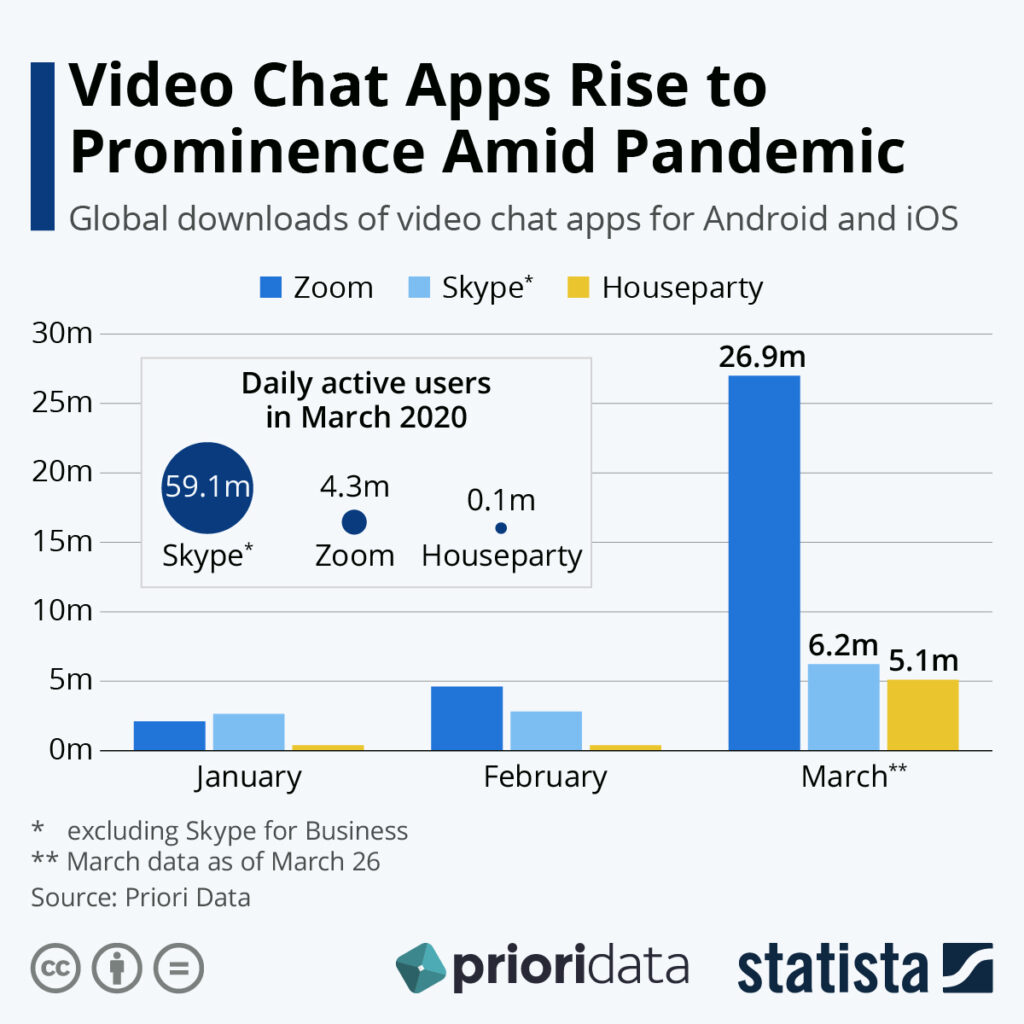 Know more on similar app : How Much Does an App like WhatsApp Cost?

Since the choice is considerably high in selecting the right video calling app, we have come up with a list of top 15 best alternate video calling/video chat apps for 2020 that you should give a try.

The main challenge FuGenX faced in building Circle Chat app was making it equally user-friendly and technically sounding as well as scalable for the increased number of users. After a comprehensive study of the Smartfren Telecom business and the purpose of the app, FuGenX built a result-oriented strategy to develop secured mobile messaging chat app with all the required features. FuGenX followed the scrum methodology to build Circle Chat app on iOS platform. continue to read more here..

I think everyone is familiar with WhatsApp, which became the world’s most popular & best video chat app. At the time of inception, it is just a text messaging app; later on, many features bagged into its wallet.

The video call feature allowed millions of people worldwide to make video calls with no cost for family and friends. The application is available in both Android, IOS, and Windows. You can also call it as a voice chatting app.

It becomes so successful in no time because of its free price tag.

By using this messenger, you can connect with the people who have a Facebook Account for free.

Note: It is not essential to have a Facebook account to use messenger. The free video chat app allows users to use both video and voice calls, along with instant messaging.

Google Hangouts is the next best video call app on the list of Top 15 video chat apps for 2020.

The introduction of Google Hangouts in 2013 is an impressive move from Google. It is a universal messaging app by combining Google Email and Google Plus. Google Hangouts is an excellent video chat app if you are a brand-specific.

Google hangouts are retired for G suite customers in October 2019. For regular users, the decision yet to take.

Google is also planning to rebrand Google hangouts into Hangout meet and Hangouts chat. These two are applicable for only Google G suite users.

Until the migration, Google assured them they are going to support Google hangouts. So, still, classic Google Hangouts is a perfectly viable option for video calling.

It is the safest video calling app that allows you to make audio and video calls, along with text messaging. With this free video calling app, you can make video calls to 10 persons at a time. You can also share multimedia files with another, even though you are in another call.

You can include all your contacts with group chats up to 150 people.

Connect your Google account for texting, calling, and mail integration.

Viber is one of the most used & popular chat apps in Eastern Europe. Like others on the list, Viber specialized in free video chat, voice chat, and instant messaging.

The Viber has refreshed the entire marker of video calling apps with the eye-catching interface. It is not only the best video call for iPhone and alternative to Skype and Facetime.

The app offers some premium services like Viber out. It allows users to call people with the help of Viber credit.

It has more than 220 Million registered users and 49 million active users.

The app is a fast, fun, easy way to communicate with your loved ones. It supports various platforms such as Android, IOS, Windows OS, and Mac OS.

This app also allows users to text messages, voice chat, and video chat with other users with zero spending’s. It also called as best video conferencing app. It has an easy-to-understand interface and thrilling.

The free version of the app consents users to conference call with a maximum of 25 people at a single time. It has 1 billion downloads, with 300 million monthly active users.

Along with the free features, it offers premium features.

Tango is another live video chat app for instant communications with family and friends. Tango is a breeze for making video calls with exceptional performance.

With the 400 million users base, it became one of the top choices for the latest generation. It offers high-quality audio and video calls for free along with some funny features like masks and avatars.

Line has redefined the way of communication around the globe. It allows text messaging, voice calls, and video calling. It is most prevalent in Thailand, Taiwan, and Japan. You can call Line app as one of the best video chat apps for Android/iPhone as it has 500 million users.

You can also add effects & filters while making video calls. You can also chat in groups, photos, videos, stickers, and many with up to 200 friends.

It is one of the reliable and versatile apps with a lot of features and fun. You can customize text messages with a wide range of themes with ease. The most exciting part of the app is it enables you to record video calls and share them with your friends.

Google duo can be your best video app for Android/IOS if you are a fan of Google products. It is easy to use and delivers very high-end video communication.

Along with skype, it is one of the limited video calling apps you can use inside a browser. Group video chats only backing a maximum of 8 people, but you can send video messages and see a video preview before you attend the call.

If you are one among individuals who are not much into other video chat apps, then for them, it is the best choice. It is a more prevalent video chat app in China and the third most popular app in the world, with 1 billion active users every month.

WeChat is more than a messaging and social media app. Its many features go far yonder simple chat competences.

You can create a Group chat with 500 friends at a time.

Snapchat is another incredibly fun and useful free video chat app for Android/IOS. It is the most preferred chat app for teenagers, which revealed in a study.

Snapchat is different from other chat apps that you can share snaps with the world that diapers in a limited time. You can send snaps privately or viewed by a select group of followers.

Imo is a simple, free, fast messaging app that used for voice and video calls. Imo is one of those apps with a bunch of features, and it is currently most popular among all mobile device users.

The app is available on various platforms such as Android, Windows, IOS, and many more. It has 700,000 daily users and 50 million messages sent every day on the platform.

You can put an end to swiping dead cards to meet new people with the help of this random video chat apps. This app allows users to swipe live cards.

Holla is a funny and addictive random chat app where you can make a free live chat to make new friends and also enables you to fix the dates. With Holla, you can meet random people from around the world with ease and convenience.

It is the latest platform that entered into video calling. Instagram is a social media platform; to be accurate, it is a photo-sharing platform. It allow users to call a user directly from the platform, and you can also add more users without leaving the platform.

It also allows users to peak into your favorite accounts and can view what they are up to through posts.

These are some of the most prevalent and used video calling apps. The apps have been ranked according to their accessibility, user experience, and availability.

You can try any video chat app/calling app from the list because they are best among the best.

If you feel any app needs to be added to the list.

Please post a reference in the comments section so that we review, and we will add it to the list.

Still, have any query please contact us filling up the form.

0
0
With the increased number of mobile users, apps like MakeMyTrip are going viral. Over 258...

Expert Guide to develop a travel app like MakeMyTrip in 2021?

Detail Expert Guide To Build An App Like Snapchat In 2021

February 24, 2021
Posted by : fugenx
0
0
Online learning mobile apps are in trending in this pandemic. Mobile applications for education are...

How much does it cost to create an educational app?