What if we told you that you could see Eiffel Tower and come back in a moment, without even spending a penny? That you could stand in the middle of World War II in 1945, without taking a bullet? You would probably mock it off, unless you are either a French war veteran who was there in the World War 2 or someone who knows what VR technology is.

What is VR Technology?

VR stands for Virtual Reality, which is pretty much self-explanatory in itself. With the help of VR technology, one can create a virtual environment with the help of latest software and hardware technologies. In Virtual Reality, a person generally uses a head-mounted equipment with audio output and hand controller to perceive and interact with the virtual environment. The virtual environment is nothing but a 3D, computer-generated space, which changes or reacts to the person’s responses, if needed. It can experienced on a laptop as well, and recently thanks to mobile app development companies, VR can now be experienced on your phone screen as well.

Initially, VR technology was exclusively available for R&D, Aerospace Exploration, and Remote Explorations, but in the past few years it has been released for the digital world, hence, for the general public as well.

Based on one’s level of participation and interaction in the virtual environment, Virtual Reality is of three types:

If you are even a little bit of gamer, you must have heard of Nintendo’s Wii Controller; yes, that is an example of non-immersive virtual reality. Typically, non-immersive reality does not involve anything more than handheld controllers. In other cases, you may interact with keyboards, joysticks, trackballs and similar stuff.

The graphics quality of non-immersive VR is minimal and hence, it is not too expensive and is easily available.

The purpose of using projector in this type of VR is to create a huge projection of the virtual environment. And then the shutter glass that the person wears enables him to perceive depth in the picture, making a 3D-effect come alive.

Semi-immersive VR experiences are far better than the basic one; hence, a higher price to pay. Semi-immersive VR is costly to wield because of the high-quality projection equipment required. At present, semi-immersive VR systems have almost extinct, considering its use among the general public, because people have a discovered a better and unbelievably cheaper option to experience the real potential of VR, which is in fully-immersive VR. 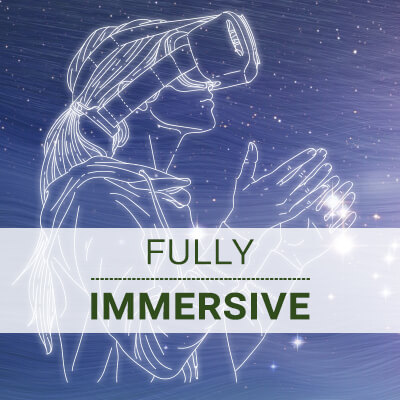 Fully-immersive VR systems are probably the first widely accepted form of VR, for two reasons: first, they are affordable and easily available. Second, they blow your mind.

In fully-immersive VR systems, you usually have these small, head-mounted devices, with an incredible potential of projecting surreal imageries. What you wear is called a Head-Mounted Display (HMD), which is basically two monitors with adjusted focal length and depth perception, placed right in front of your eyes. For the best fully-immersive VR experience, one can use CRT-HMD for ultra-high resolutions with refined details.

The expansion of fully-immersive VR happened somewhere 2013, when major mobile manufacturing companies started distributing VR gears in typically their flagship smartphones. Back then, Google and Samsung were among the most popular mobile makers that distributed VR.

As of today, we have Google Play Store swarming with apps released by the top mobile app development companies, games and simulators that offer advanced VR experience through virtual environments that offer a person, the capability to interact with their surroundings in a completely natural way. Not only that, VR is currently being used in almost every large sector, such as education, transport, military, gaming, entertainment and many more.

Among the many available in the market, only the high-end VR gears can guarantee the type of VR experience we are talking about. So if you are planning to buy one, choose one among these:

Released in 2016, Oculus Rift has been one of the most anticipated VR headsets ever. Backed by Facebook, it got the much needed mass reach even before Palmer Luckey – the founder of Oculus VR announced its official launch.

The most interesting feature in Oculus Rift is that it is a plug-n-play device that can be used with any device that supports VR technology. At present, most of the high-end laptops and gaming consoles offer VR support in their devices, and this is why, Oculus Rift has always been most popular in the gaming community.

One of the cheaper options especially built for mobile phones, Google Daydream took the market by storm when it was launched in the winter of 2016. Mobile app developers also seized this opportunity to build amazing apps with VR support. The only issues with Google Daydream is that it was launched only for a limited number of phones, but that is changing. Google later extended support to Samsung’s flagship phones as well, which immediately resulted in increased sales of Google Daydream, as Samsung phones are one of the highest selling mobile phones in the world.

Is the VR Market growing?

We believe figures speak better than words, and here is what the figures (derived from Statista.com) say. 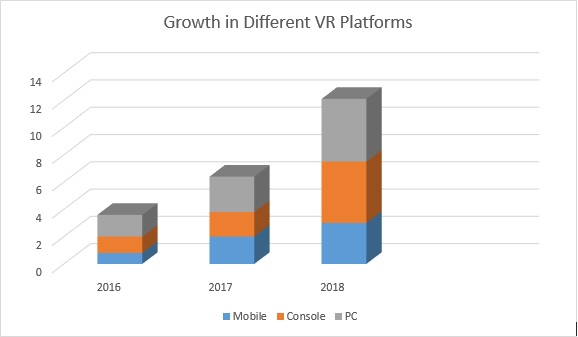 Clearly, from what we see in the graph, VR market is set to grow at a blistering pace. Consequently, the usage of VR technology in every sector practising it, would grow manifold.

Despite all the buzz for the growth in VR market, something that we are being ignorant of is the fact that these devices are quite expensive and in the future, if we want an even better experience, we may be looking at even pricier devices which may spoil the entire concept of affordable technology that we are cumulatively aiming for. But then, what do we know!

Step into the world of Virtual Reality with the leading VR and mobile app development company – FuGenX Technologies.

Drop a mail at info@fugenx.com or quickly fill this form to let us know you need a hand!