How the Mixed Reality Revolution is Set to Change the World

Home › Our Blog › Blog › How the Mixed Reality Revolution is Set to Change the World
Blog
Technology
August 20, 2018
Posted by : fugenx
Comments: 0
Likes: 0

Mixed Reality Revolution: How Does it going to Change the World

Within a couple of years, all the technologies that are related to the reality have been grown very advanced. VR that stands for Virtual Reality is always on the news and blogs, many devices made this technology available for the consumer market. Most of them are related to gaming, but the consumers seem to like it a lot. Other than VR there is Augmented Reality or in easy words AR. There are many mobile applications available that use the AR technology.

VR generates an immersive simulated setting for the user which the user can explore on its own. While on the other hand, AR takes help from basic digital content over the physical real world. Both VR and AR, though likely to have their own limitations when it comes to the fluidity in interplay’s that they allow. But now, with the help of modern technologies and advancement in technologies, all of those bars are set to disappear with the appearance of mixed reality (MR).

Most of you might have never heard of it, but MR is the most advanced concept so far in reality tech, the mixed reality is a hybrid of both AR and VR that allows lifelike interactions with objects of the virtual world. MR technology maps the user’s real-world setting to position digital reality like holograms. This terminates the boundaries between the physical and virtual world that provide realistic & seamless interaction with virtual simulations using gestures. Though the tech is still considered to be in a nascent, evolutionary stage.

Before we get into this MR, first let me tell you the exact difference between AR, VR and MR.

The basic concept in Virtual, Augmented and Mixed Reality technologies are all similar, as they all try to replicate reality. But each one has it’s own ways to perform things. Virtual Reality Gears that are built by Oculus and HTC take help from the VR tech and completely replace your actual reality with a new and virtual one. VR devices generate a 3D environment in which you can explore and feel. VR created world feels like the real world which allows you to interact.

Augmented reality superimposes digital data on top of your real world, the most well-known example of AR tech is the famous game Pokemon Go. Certainly, after that, we get to see this tech in many other mobile applications, but it is nothing more than a rough digital image over the real-life image. AR is not capable of understanding your space completely and that is the drawback of AR.

Mixed Reality is a little different, it does work on the same concept, but it combines several sorts of technology into one device . MR devices are different from both AR and VR devices as MR devices are continually examining your room and inferring a 3D perception of your surroundings, using that data to seamlessly insert the digital information in your real environment that interacts with the environment as well, and the user can enjoy the MR tech from the other side of a transparent screen.

If you are wondering How the Mixed Reality Revolution is set to Change the World? Then below are some of the ways MR is going to be used to change the world.

Being an emerging technology, mixed reality provides a wide field of possibilities for its ios apps and android application. The current situation reveals a number of possible applications for MR, some of them are based for consumers, such as theme parks and entertainment apps. Though, in the future mixed reality will provide the solutions to the problems in a business.

With the help of MR-based applications in the engineering, infrastructure and construction professional teams can work together without being present at the same place to coordinate on projects no matter where they are in the reality or not. Design teams will be able to inspect and shape design models as well as assess structural and mechanical problems. Architects, dealers and allied advisers will able to visit building sites at any time and collude on projects.

This technology can possibly bring a whole new revolution to marketing and advertising. Holograms could change the old marketing and become the new trend in product packaging, enabling businesses to reach their target consumers with customized digital content. Holographic visuals will be used at the place of 2 dimensional marketing services to bring new consumers like never before. MR technology could enable consumers to share space and communicate with holographic product agents, bringing a new level of performance to customer service as well.

One of the fields that could see tremendous breakthroughs using MR technology is the field of doctoring. Holographic images of vital organs can cover the way for safe and precise operations. Medical students can also avail from practical training situations and learn to assess potential symptoms and even perform complicated medical routines. 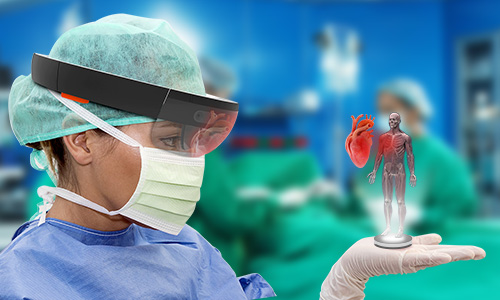 With the help of Mixed Reality new forms of communicating with digital information that will revolutionize the whole world. It will open the gates to a new, unexplored being loaded with events, where we will have the ability to customize our human existence, away from the restrictions and isolation of traditional computers and smart devices. Many businesses started to use this new technology to grow higher on to the ladder of success. It’s fascinating how they are implementing this new tech to grow their business organically. Some of them are using it to provide practical knowledge to their employees by implementing the MR in employee training while others are using it as a part of a promotion to grow their brand value.

In current time the true change is that this type of tech requires the user to be present in the front of devices. But it’ll be an entirely new way to experience the film, live music, gaming, education, and so much more if the hurdles have been crossed. It appears obvious that mixed reality has some hurdles to surmount before it becomes publicly available. But there is no doubt that this tech is going to change the world very soon for forever.