What does AI make sense for businesses?

How AI can make operations superior at businesses? 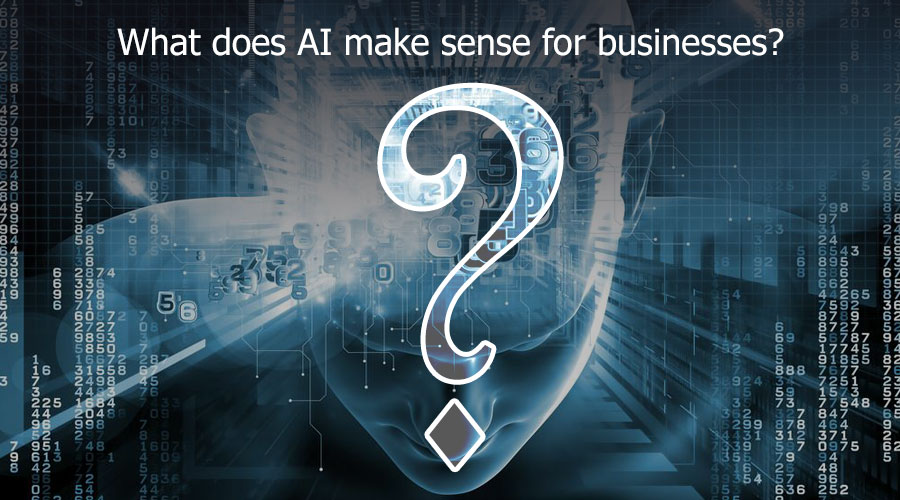 Artificial intelligence is undeniably not a new term in the tech world. It touched the foot of tech industry in 1956 when the AI research was founded at a conference at Dartmouth College. Attendees of the event including John McCarthy, Marvin Minsky, Allen Newell, Arthur Samuel and Herbert Simon later became the leaders of AI research.

Now AI is at a loud talk. Tech giants are digging it deeply. After Facebook announced that soon it will allow developers to build AI-driven chatbot apps, and AI-driven Google Allo hit the market, AI and machine learning gained maximum attention.

In fact, AI is not new: IBM Watson, Microsoft’s project Oxford, and Apple acquired Vocal IQ, all are AI-driven. So it has been a sense for tech-optimistic businesses to choose AI-flavoured service or product to drive the business growth.

If you are intended to know what AI can do for businesses and its arms around existing technologies, you should go through this specially crafted info which is especially for you:

According to IT leaders, some of the tools that are being developed for AI will help us search big data. If you want to stay competitive and efficient when data continues to skyrocket, you may need artificial intelligence to access it in a hassle-free manner. According to IDC, there will be around 44 zettabytes of data by 2020. But companies can’t rely on data analysts alone to manage and have a clutter-free access to a massive amount of data. That’s where AI comes in.

Driven by machine learning, AI adds an intelligence layer to big data to manage complex analytical tasks much quicker than humans. But some people concern about job-loss, but industry experts say there will always be work for good critical thinkers. Recently, when India’s leading software exporter Infosys was in nuisance, criticizing that automation it brought in fired out thousands of man force, but the CEO Vishal Sikka put a blocking stone to the rumours saying that the existing man force will be trained to deploy into other operational sectors in the organization.

AI has put a corner stone to replace customer support team with the possible, advanced AI-integrated networks. Machine-language driven chatbots are able to assist customers on solving query, and give offers. Chatbots can exactly mimic the conversational languages that customers use to interact with them and are able to understand both voice and text commands.

For example, if a customer needs help to check the available offers, the chatbot can accumulate all the preferred products and put it before him. The global fast-food chain Taco Bell has already deployed a chatbot named TacoBot on Slack for customer support. Facebook Messenger and Telegram are other major app platforms that allow chatbots to be deployed. In addition, the emergence of chatbots has created new revenue streams for mobile app developers across the globe.

AI as disease predictor in healthcare

Designed by scientists at Imperial College London, the recently unveiled software leverages AI to build 3D versions of patients’ hearts, so 3D versions can reduplicate how they contract with each heartbeat. With the help of this info, doctors can predict how long a patient can survive with his current condition. This promises as a far better technology than currently available systems.

As AI is trending and its adoption has already kick-started, it’s something everyone involved in IT should investigate to achieve first-mover advantage.

To know more about AI or Android and iOS app development services we provide, please reach us at info@fugenx.com or fill up the form.