Know Why Most Enterprises Love to Develop Apps in Swift

Swift is a multi-paradigm, compiled programming language, which is created for iOS, OS X, watchOS and tvOS development, by Apple Inc. In better words, Swift is a robust programming language that allows to develop the immersive, responsive and secure consumer and enterprise applications for different Apple platforms. Swift is intended to be more flexible to flawed code (“safer”) than Objective-C.

Swift is well-known among app developers for these four main reasons, it is open-source, ease of learning compared to Objective-C, writing code is interactive and fun, and the code can be written concisely and quickly, the latter makes app run seamlessly. 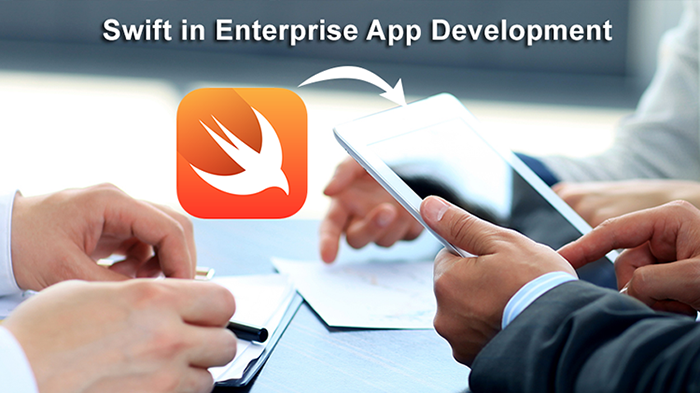 When developing an enterprise app, IT department at any enterprise gives ★ (high importance) for these three considerations – privacy, security, and trust. Apart from helping in building secure and robust enterprise apps, Swift makes enterprise app development dynamic in following ways:

Multi-faceted language: Swift is considered as a multi-faceted programming language that allows developers to develop all types of apps, including commonly used enterprise apps, and advanced lower-power Apple Watch apps.

Open source for enterprise app development: This is a big move by Apple. By making Swift open-source, Apple has truly become developers friendly. Before this, Microsoft .NET was the most used open-source language (software framework) in the enterprise environment. Open sourcing of core libraries enables developers to develop efficient contextual enterprise apps on the latest versions of iOS, which results into the enhanced employee productivity and streamlined business process.

Cut down initial app size with Dynamic Libraries: Generally, enterprise apps take more time to load as they are very big in size. As dynamic libraries are directly uploaded in the memory, the initial size of the app can considerably be cut down with the use of dynamic libraries. Dynamic libraries first started supporting the iOS app development from the launch of Swift and iOS 8. Decreased enterprise app loading time means increased employee efficiency and quicken work process.

Other Key Benefits of Swift Language in Enterprise App Development Include:

We are FuGenX Technologies, a global enterprise mobile app development company in USA and India. We develop most sough-after enterprise applications on iOS and Android platform to enhance employee productivity and streamline business process.

To get an instant quote for Swift powered enterprise app development, please reach us at info@fugenx.com