Which Platform IS Best Android and iOS ? 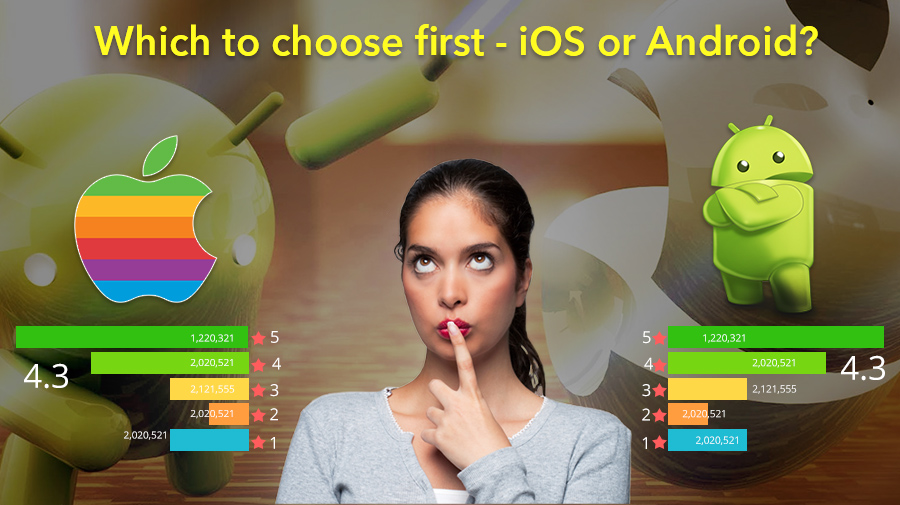 Why Ambiguity b/n iOS and Android?

The app industry is swiftly evolving day by day. A fact that a large number of startups are focusing more and more on the app-driven venture around the world. According to the technology company Gartner, Android achieved 84.7 percent market share as of the third quarter of 2015, increasing 1.4-percent from the last year. Whereas, iOS accounted 13.1 percent of all smartphones sold in Q3 2015, which is a 0.6-percent increase from the last year. Especially, iOS, specifically iPhone’s growth is considerable in developing countries like India, China, Brazil and Indonesia, which has kept app-driven startups in the ambiguity. They can’t skip iOS and Android at the moment.

In many recent cases, most of the businesses failed to achieve the expected result from the app development as their app strategy was not fruitful or they lacked the suggestion from their app development partners on choosing the right platform first. Below are the result-oriented suggestions by FuGenX to choose the right platform that helped its clients significantly.

This is a very important factor to consider. If you’re developing an app for an already established business, then you have to put lesser effort to conduct a study on your customers. If you’re an early-age startup, your effort should be more. The customer study should include what type of devices your customers are using, & where most of them are staying. If your customers are in developing countries more, you should prefer Android first.

This is not everybody needs to think, only who wants to make money through ads and premiums, not by selling products or services. Android has a higher percentage of ad-supported apps. This is good if you want to offer app at free of cost, and make money as a publisher later. But, if you don’t want to offer your app for free of cost, then Android can’t be a right choice to you because Android users less likely to purchase apps. Paying for apps is still more common on iOS. Also according to a recent report, iOS is consistently bringing in 75% more revenue than Android. In this part, preference is 50:50.

Though it is not a big factor, it needs to be considered. Generally, Android app take 2-3 time longer to be developed compared to iOS because it is to be considered for a variety of devices, unlike only iPhone 4, 5, 6, 6S and few others. The amount of time it takes to develop an app has a direct link with the cost. The more the time taken, the more will be cost. But, you can’t just head towards iOS because if your customer (user) base consists of Android users most, then your iOS app would be a waste of time and money. You could consider it when your iOS customers are nearly equal number of Android. In this part, preference is 50:50.

When to start with both platforms?

When not to start with both platforms?

When to move to the next platform?

Once you’ve achieved expected app performance, consider moving it to the next platform. Before going ahead, take a complete report of the existing platform. Whatever features you had missed in that, add it in the new platform.

Whether you want to choose Android or iOS, or both together, you should create a result-oriented app strategy that should be effective as much as possible because there is a very tight competition in the app world. To accomplish that, you need a support of well-versed app developers who can help you along the way; before, during and even after mobile app development also.