Get to know the Advantages, Benefits More Of AR Reality on Business

Augmented Reality is penetrating deeper into businesses as its uses are more extensive. The technological up-gradation is becoming mandatory for meeting the latest demands. On the other hand, technology is also taking better shapes day by day, and various developers need to adapt themselves to the newest trend. Putting all these together, Augmented Reality, the latest hero in the tech trend is the order of the day.

Augmented reality brings a new path to interoperability and information sharing and, ultimately, helps to address business needs better. It is a mix of virtual and physical worlds with real world components. It increases the computer-generated comprehension data to provide immersive experiences.

Information can be in the form of graphics, video, sound, and many more. Because of its excellent marketing and academic ability, it accelerates several business operations. In addition, it will create new methods to or learn new activities and products their products, help the work of professionals and lead to reduce cost.

According to statistics, Augmented Reality will reach 1 billion users by the year 2020. Transportation of smart augmented reality glasses worldwide is expected to reach 5.4 million units by 2020. The augmented reality market is projected to grow to about US $ 90 billion by 2020. 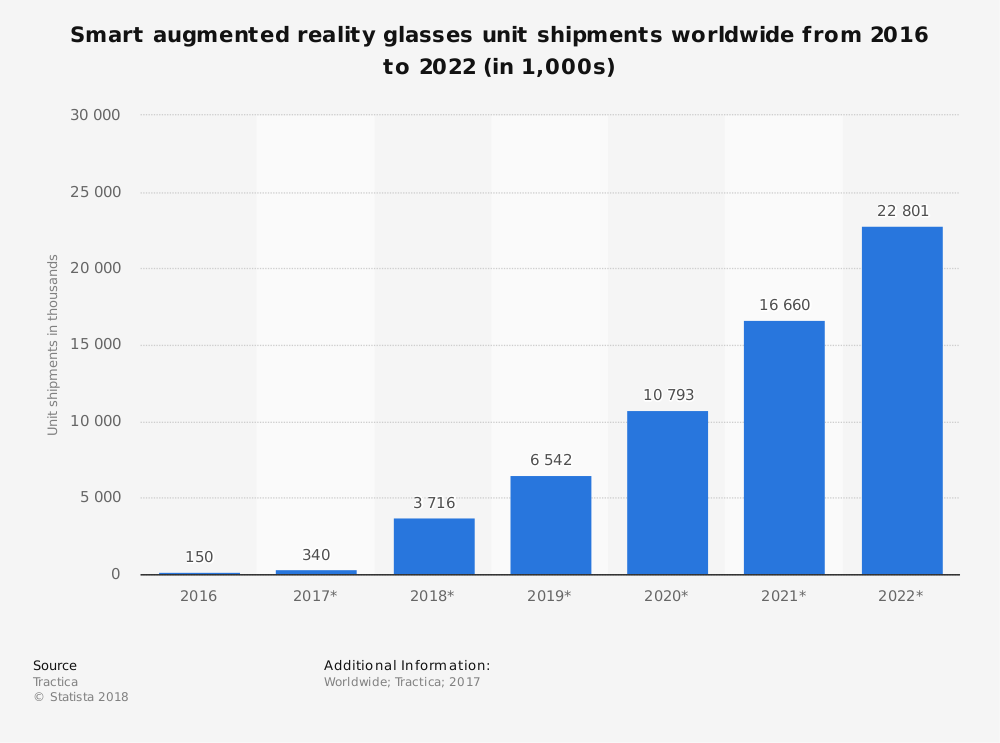 As per the Statista site, the gaming industry is one of the most lucrative among the various industries that benefit from AR, for example, PokemonGo. AR and VR games are expected to have a growth of 216 million users, which is predicted to reach US $ 11.6 billion by the year 2025.

Recommended: Things to Consider Before Developing an Augmented Reality App

Now, let us look into the Impact of Augmented Reality on Business in 2020

The best part of AR is that it is one of the new and latest methods to make the user feel connected. Various business firms take this feature advantage in making their business reach public. Advertising is one of the best ways of communicating the company to the audience, which the AR serves best for this purpose. For instance, with the help of AR, users can see the advertisement in 3D view, with full details because of its high resolution.

5 Advantages of AR for Marketing

AR is noticeable and unique – In today’s world, there are many amazing methods to attract your targeted consumers and generate the necessary buzz, as you are giving your consumers, which is not there with them yet.

AR chances – The possibility of creating something new and unique and thereby expressing one’s personality is more attractive than media standard content.

Quality content development – With augmented reality, you can provide customers with a tool to develop quality content they couldn’t do before.

AR technology gets more virality – talking about brand buzz. The social sharing and mouth campaign in Google will raise the acquisition of new consumers.

Interactivity drives retention – Entertainment trend is on the list of leaders, but not in vain. The most attracting content will motivate users to communicate with your mobile app again and again.

More and more users are turning towards the usage of AR environment these days. As per the statistics, the number of users shifting to AR applications is on raise. Notably, the gaming industry, for example, Pokemon GO users are raising more in name, proving the increasing demand for AR. As the number of users increases, the business space also grows. 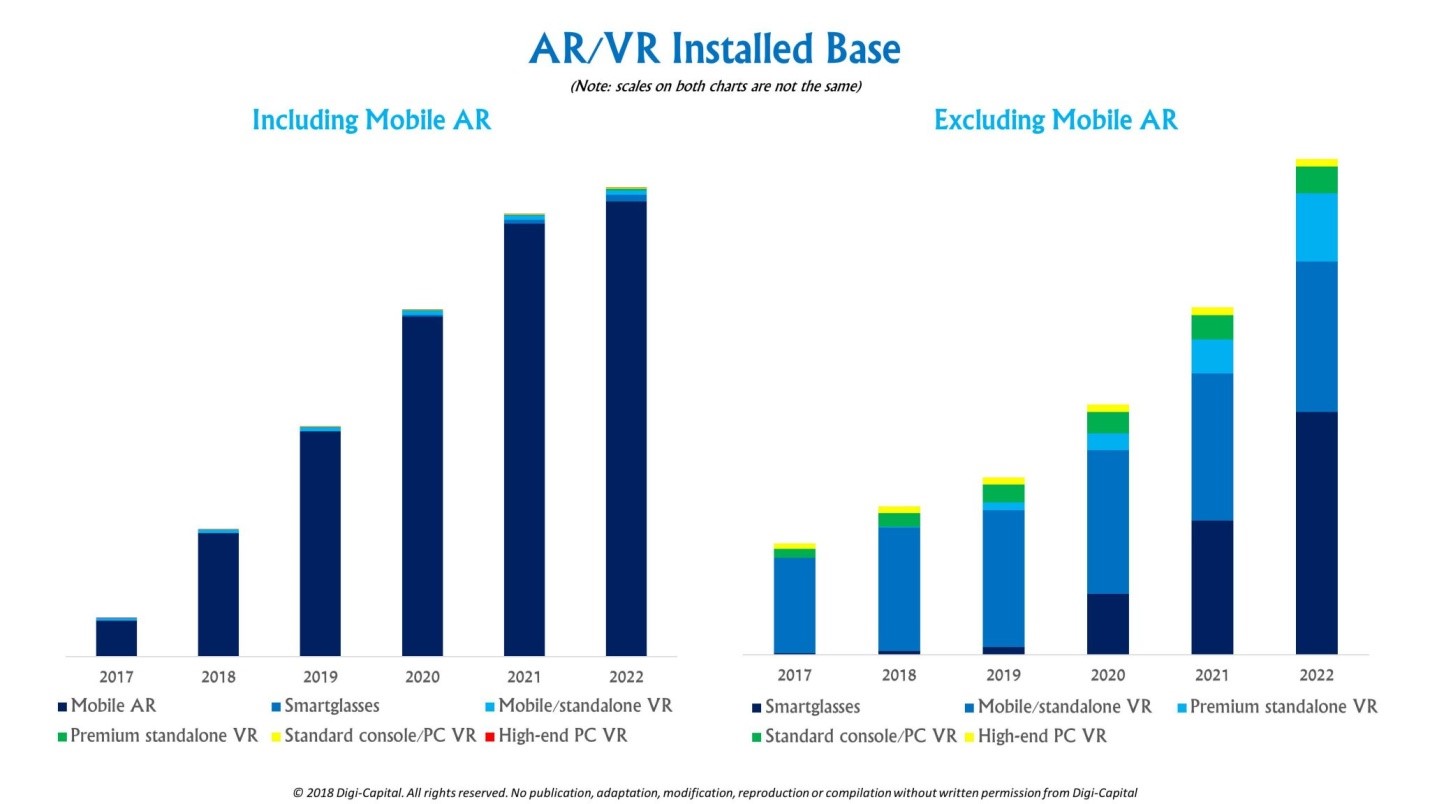 The launch of Apple AR Kit at the Apple developer’s conference in June 2017 has revolutionized the future of AR, thereby influencing the business drastically in coming years. This kit helps the app developers to integrate the digital experience with the real business world using various AR apps. This feature works best with iPhone X, which runs on iOS 11.

Social Media is the one place that people are spending much time in their life. A lot many Social media platforms are shifting towards the integration of AR with their platforms. For instance, Facebook is working on AR smart glass for incorporating AR in its platform. As announced by Mark Zuckerberg, CEO of Facebook, AR is going to be the next computing platform. This clearly indicates the impact of AR in business in 2020.

With the help of the latest science and technology, it is possible to give the shape of an app to the various innovations and Augmented Reality is no exception for it. So, there are so many apps budding up these days with the incorporated AR in it, including Gadget, flows, Eyemaps, Housecraft, and Euclidian Lands.

As indicated above, Augmented Reality has the abilities to transform the fate of the business in 2020. Various industries are getting AR incorporated into their systems for making it viral-like games that entertain you at home, social platforms, marketing, etc.

The various AR benefits and VR benefits are not just restricted to the above mentioned, and instead, it is expected to expand for sure.

This AR serves very usefully for the various start-ups and even technological giants. Thus, it gave a conclusion that AR is going to rule the tech world and create new experiences in the future.

0
0
When you are new to shopping malls or airport, it might be a tough task...

How Much It Cost To Develop Indoor Navigation App?

Expert Guide to develop a travel app like MakeMyTrip in 2021?